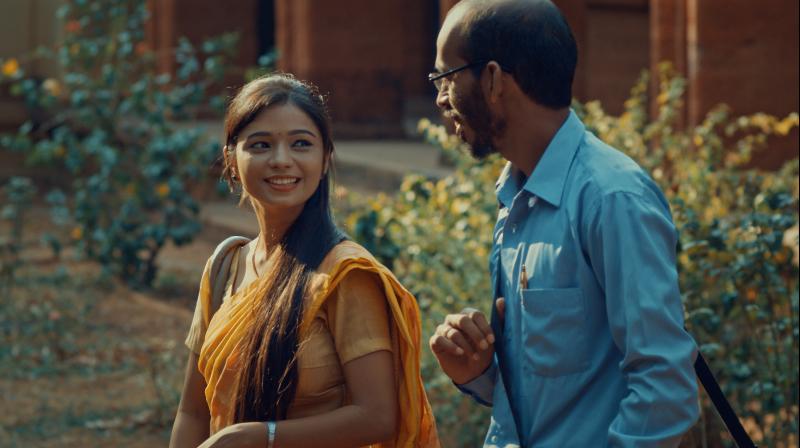 The year 2017 whizzed by in a jiffy, like shots in a Hari movie, as if in a hurry. It was a year when content shone brighter than mammoth cardboard cut-outs. Stereotypes were shattered even as tried and tested formulae fumbled at the box-office. Producers were more adventurous and it paid off, mostly. It’s a myth and an excuse that audience tastes have changed. They just sift through the fare on offer and ingest what’s easy on the palate, ruthlessly rejecting the rest. Cinema, now is low on the list of family outings unless endorsed by a few who they feel are reliable. A walk in the park or window shopping in a mall is less expensive and more relaxing. With all the giant strides in technique and sound, save the Baahubali sequel it was basic, unpretentious sentiments that worked, the more realistic kind, not the manipulative.

Ondhu Motteya Kathe was definitely the Kannada film of the year. Set in a small town this tale chronicles the insecurities of a prematurely bald youth, tongue in cheek with self deprecatory humour, not seeking sympathy but empathy. The writing is simply endearing making you chuckle at the protagonist’s predicament even while hoping he finds the love he seeks. Raj B Shetty, the writer and director shines as an actor too with an understated performance. It’s a perfect example of how a so-called weakness can be turned into strength, creatively. The film made on a shoestring budget was probably the biggest hit of the year if you calculate the investment to returns ratio. Pawan Kumar who had the gumption to promote and release the film was annoyed when I wrote that he’d made more money than the producer. I stand by my source but found it strange because the entire team was grateful and did not grumble about the fact. The fact is that good cinema triumphed.

The Baahubali’ juggernaut was unstoppable as the sequel swept the box-office with the story having enough twists and turns than the first part. Filmmakers always crib when a film is bashed by critics after all the hard work they put in. Hard work should ensure quality and that’s where Raj Mouli triumphed. The film did not depend on visual splendour alone but ensured the riveting screenplay kept you glued. The whole country applauded. Suddenly down South was the new up North.
There was the audacious Arjun Reddy, a mirror to today’s youth who’re in a hurry to experience everything today, now. You may not agree with the hero’s attitude but then it’s about a person with a certain attitude. Let the folks around him deal with it and if the girl who falls for him doesn’t complain who are we? Vijay Devarakonda shines in a role than no established hero would have agreed to play. The talented Shekar Kammula sprung back with ‘Fida’ making it clear that he would tread the beaten path but would ensure he’d make it more enjoyable and relatable.

Vikram Vedha, in Tamil had everybody talking, again about the pithy writing and the performances by the mercurial Vijay Sethupathi and the endearing Madhavan. The blurry line between good and bad is beautifully brought out, not with unnecessary justification but the ambiguity that life offers. Theeran Adhigaram Ondru is a cop film with a purpose. Based on real life events and laced with the right amount of exaggeration the director walks the tightrope between fact and fiction with the grace of a trapeze artiste. The film needed a star who can also act and who better than Karthi? The violence is raw but it’s the perseverance of a dogged policeman who follows instinct and procedure rather than plain brawn that makes the film fascinating. ‘Aramm’ with Nayantara was engaging but ‘Aruvi’ opens the floodgates for filmmakers who don’t look upon audiences as intellectually inferior. It’s easier for good meaningful films to succeed today. The difficult part is the paucity of producers to back them. SR Prabhu who produced ‘Aruvi’ and ‘Theeran’ is a star among producers with a keen eye for good content. As usual there were gems that glowed in Malayalam cinema. ‘Take-Off’ set the ball rolling with an engaging tale about Indian nurses held hostage in strife ridden Iraq. Based on a real life episode it has enough emotions to keep you rooted even while not compromising on the setting. Parvathy is outstanding as a nurse who has to deal with emotional conflict as well as external. There was the brilliant ‘Angamaly Diaries’ with stunning performance by newcomers, the cleverly written ‘Thondimuthalum Driksakshiyum’ with the ever dependable Fahadh Faasil and at the fag end of the year ‘Mayanadhi’. Please watch it if it’s still running. Thankfully and rightfully directors were the stars in 2017.
Source: The Hindu