KEE The Movie – Jeeva in a Techie look 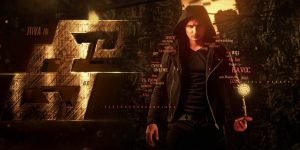 The movie Kee is an upcoming Tamil science fiction psychological thriller film, which is written and directed by Kalees and produced by Michael Rayappan. The film acted by the actor Jiiva in the lead role, while actresses Nikki Galrani and Anaika Soti play the leading female characters. The music composed by Vishal Chandrasekhar.

Jiiva is an actor, producer, singer, philanthropist, model and a dancer. He acted in the Tamil films. His first lead role in the romantic movie called AasaiAasaiyai, before performed in the film Raam. He has stars many cinemas like Dishyum, E, KattradhuThamizh, and Ko.

Nikki Galrani is an actress, model, and a fashion designer. She works in the Tamil and Malayalam films. She also acted in the Kannada and Telugu films. Her first movies are in the Malayalam language is Vellimoonga and in the Tamil language film is called Darling.

Anaika Soti is an actress. She has acted in the Tamil, Telugu and Hindi films. After making her debut movie in the Ram Gopal Varma’s bilingual film called Satya 2, she went on to star in the Tamil period film is known as KaaviyaThalaivan.

RJ Balaji is a radio jockey, presenter, comedian and an actor. He is well known as the host of the BIG FM 92.7 show called Take It Easy and its defunct segment Cross Talk. Balaji’s films like TheeyaVelaiSeiyyanumKumaru, Vadacurry, Naanum Rowdy Dhaan and Pugazh.

Crew of the film

Kalees (The Director of the film)

Kalees is a Tamil Film Director. The movie Kee is his first debut film in the Tamil language.

S. Michael Rayappan (The Producer of the film)

S. Michael Rayappan is an Indian politician and an incumbent Member of the Tamil Nadu Legislative Assembly from the Radhapuram constituency. He is also a film producer producing the films such as Naadodigal, Goripalayam and Sindhu Samaveli under the Global infotainments banner.

Vishal Chandrasekhar (The Music Director of the film)

Vishal Chandrasekhar is an Indian film score and a soundtrack composer. He has scored the music for Tamil films. Vishal made his music composing debut with the film called Hi Darling.